Democrats Have an Apparent Lead, but Nothing Is Set in Stone 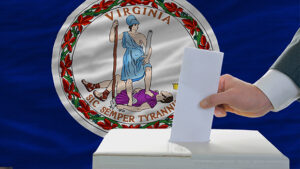 The last day to vote early in-person in Virginia was October 30th, but you can still vote in person on Election Day (Tuesday, November 2, 2021).

Early voting in Virginia’s 2021 election is now over and we have the results…kind of.

This is a dramatic increase and may indicate an increase in overall voter participation in 2021. We won’t know what the total turnout rate will be until polls close on Election Day (you can vote from 6am-7pm on Tuesday, November 2nd) but this is leading to an abnormally high turnout, which is unusual for off-year elections.

For context, over two million Virginians cast early ballots in 2020, but turnout is expected to be much higher in presidential elections vs. off-year cycles, and the global COVID-19 pandemic had an anomalous impact on voting habits across the board.

While we have detailed numbers about how many voters have chosen to vote early, predicting who they’re voting for is more difficult because Virginia doesn’t require voters to register with a political party. This makes it somewhat difficult to use early votes as a metric for measuring enthusiasm or total turnout. Knowing this, there are methods for predicting which candidate is benefiting the most from early voting.

According to a recent Washington Post article, “About a third of the early ballots cast have been in heavily Democratic and voter-rich Northern Virginia.” However, there are two important things to note when processing this statement. The first is that these are simply votes from a traditionally Democratic region of the state (we don’t know for sure who these voters are voting for). Additionally, much of the electorate that votes early is also more enthusiastic and involved in elections in the first place (they were going to vote for their party no matter what). This doesn’t tell us much in an election likely to be decided by independents and swing voters. We won’t know for sure whether or not this enthusiasm translates to the general electorate until the votes are counted on Election Day.

While Democrats are likely happy with the large number of early votes in parts of the state that are friendly to them, it’s also important to note that this increase has extended to GOP-friendly territory as well. Republican candidate Glenn Youngkin has been traveling to all parts of the state (including Northern Virginia) and has seen large crowds everywhere he goes. Large crowds don’t directly translate to votes though, and this could again be made up primarily of voters who are extremely loyal to the GOP and would vote for him anyway.

The only thing we know for sure is that the number of early votes has risen sharply when compared to previous state elections. Democrats appear to have the edge, but that lead could disappear rapidly if this turns out to be a Republican wave election that the polls haven’t picked up on. Even though early voting is high, its total will still be significantly less than the total of votes made on Election Day.

If you haven’t voted already, you’re encouraged to do so on Tuesday, November 2nd, as nothing in this race is set in stone. Some are even predicting that it could come down to a significantly small number of votes, which means that EVERY vote matters!