Resources Are Available to Mason Students Who Need Support 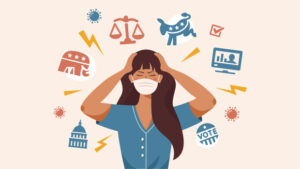 Visit the CAPS website (caps.gmu.edu) for resources that can help you deal with election stress and anxiety. Illustration: Viktoriia Ilina and dutchicon, iStock/Getty Images

Elections cause stress. Stress can take many forms. Some people may experience anxiety, a series of heightened fears and emotions. Others may experience fatigue, or burnout, a lack of enthusiasm, even for things they used to care about, an inability to engage with issues or events or feel strongly about them.

“The unknown outcome of elections may cause fear and uncertainty about the future; this is especially true for those who check the news very frequently. For some people, they fear that catastrophic things may happen to them if a certain candidate wins or loses. Mostly, election cycles cause stress because we are limited in how much we can control the outcome,” Mason’s Counseling and Psychological Services (CAPS) Director Dr. Jennifer Kahler said in an email.

Kahler noted that elections can be particularly stressful for marginalized students, both because of policies being discussed, and because of the bigoted rhetoric that can pop up around elections, especially on social media.

Pastor Drew Entz works with ARISE Campus Ministry, an LGBTQ+ affirming Christian campus ministry. He says that election time can be particularly stressful for the students he serves, because they tend to call attention to what makes people different from each other.

“[I] definitely have seen that, have sat with students, have talked to them, chatted with them about stress, because for many of them it’s not just an exercise on who you like more. That there are policies and politicians who often times speak out against students’ identities and who student students feel like they are. And so, there’s always a lot of stress,” Entz said.

Entz also says that some of the events of the last couple of years left people feeling like they had to deal with multiple emergencies at once, and that many, especially in progressive or pro-LGBTQ+ circles feeling like they have to take a break and step back for a while.

Professor Jack Curry worked for several newspapers and publications and now teaches journalism at Mason’s Department of Communication. He says that students are likely to feel stress due to the speed of the current news cycle and the speed at which they feel pressured to respond.

“It’s not only the event, but then the ripple effects that event creates. There’s so much, not only information, but static, that creates constant bombardment,” Curry said.

Curry also pointed out that there are not actually more current events going on than in the past, but that there are so many more opportunities for people inside and outside of traditional news media to get eyes on events as they happen that it can be both a blessing and a curse.

“You’re only burnt out if you’re tuned in,” Curry said.

Kahler said that people should seek counseling if stress starts to interfere with their ability to perform everyday tasks, like sleeping or doing school work. She also says that students can take steps on their own, like limiting media consumption, getting involved with the issues that really matter to them, and checking in with friends and classmates.

Resources for dealing with election stress, including links to two post-election “Relax and Unwind” sessions, can be found on the CAPS website.

Join us for two “Relax and Unwind” drop-in virtual spaces to de-stress after the election: