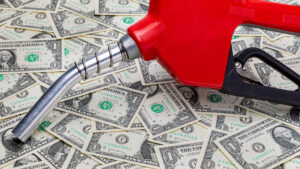 According to a recent NPR poll, 40% of Republicans and 37% of Independents say inflation is the top issue influencing their voting choices in 2022. Photo credit: JJ Gouin/iStock via Getty Images

Energy inflation has acutely affected the Northern Virginia area, including the main campus of George Mason in Fairfax. Energy inflation means the price of energy is rising more sharply than usual. Currently, transportation costs such as gasoline purchases account for 28 percent of energy consumption. Energy prices rising affect commuting prices, and general spending on vehicle fuel and other forms of energy.

Fairfax County has been consistently above the national average in terms of gas prices. The Virginia State gas price average is 3.33 dollars, while Fairfax’s prices stand at a higher 3.69 dollars, according to AAA. At one point this summer, Fairfax County had the highest gas prices in all of Virginia.

College students are impacted particularly hard by rising energy prices. 20-24 year olds typically earn an average weekly income of 633 dollars, while 25-34 year olds earn an average income of 928 dollars. Due to having less income, younger citizens often spend a greater proportion of their money on fuel than someone older than them would.

“Rising gas prices definitely impacted those who are less well-off,” Mandell said. “Prices have also made my mother discouraged about me driving even short distances. It has certainly made people more critical of the government, for example with Republicans becoming more critical of the Biden Administration.”

According to an NPR poll published last month, inflation is the biggest single issue driving voters. For 40 percent of Republican voters and 37 percent of Independent voters, inflation is the top issue influencing voting choices for this election cycle. However, this sentiment is shared by just 13 percent of Democrats, who rank abortion rights, healthcare, and the January sixth hearing higher.

“There has been a lot of spending associated with the COVID crisis, throughout the current and previous administration,” Martinelli said. “This has implications for the level of [energy prices]. There have been some international causes on the relative price of causes, related to supply chain problems caused by the COVID crisis and the war in Ukraine. There are accusations that price gouging is creating inflation, which has created shortages, which happen when the price mechanism is not allowed to work.”

Multiple sources including the U.N. describe the global economic effects of the war in Ukraine. Becauses attacks by Russia have left Ukraine unable to export substantial food and energy resources the way they usually do, supply has gone down, and prices have gone up.

There was an energy crisis during Carter’s Administration, where a fuel embargo from Middle Eastern nations ultimately caused the price of oil to rise from $3 to $12 per barrel. In 1978, Incumbent President Jimmy Carter’s Democratic Party lost 15 seats in the House of Representatives. Two years later, Carter went on to lose to Ronald Reagan by a margin of 9.7%, including a 12.7% margin in Virginia.

“We attribute too much to the administration, but it is a constant that bad economic conditions lead people away from the incumbent,” Martinelli said. “This may affect the prospects of Democratic candidates. [However], this is a super polarized electorate, so the effect may be negligible.”