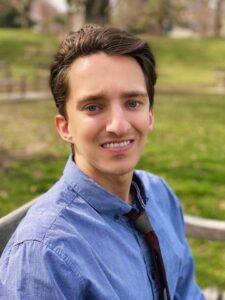 Billy Bates, a Mason senior majoring in physics, is currently running for Fairfax City Council. His platform consists of progressive policies that include denser zoning, greener development, alternatives to driving, and numerous other policies which can be found on his website: www.batesforfairfax.com.

He first got involved in the political process because of Fairfax High School’s mascot.

“In freshman year of high school, I was trying to get the team named changed, which was Fairfax Rebels, named after the Confederates,” Bates said.

Old street names, too, were problematic remnants of the Civil War. Both issues would ultimately be solved years later, but working on them served as a catalyst for Billy, a gateway to other issues that were locally and nationally relevant.

His first political internship was with the 2020 Elizabeth Warren primary campaign. He then went on an internship blitz including Representative Gerry Connolly’s (D-VA 11) campaign, Delegate Alfonso Lopez’s (D-VA 49) campaign and office, and Terry McAulliffe’s (D-VA) gubernatorial campaign, along with various other internships relating to Democratic campaigns.

Bates has also had just as much local political involvement. He served as Fairfax High School’s student liaison on the Environmental Sustainability Committee from 2020-2021, he is an active member of the Fairfax City Democratic Committee and played an active role in the Fairfax City Citizens for Smarter Growth, a group self-described on their website as supportive of higher density mixed-use zoning, bicycle-friendly development, and financially sound policy. He helped design their current logo and helped run their newsletter.

Surely with the number of internships and work opportunities Billy has he must have a secret? Nope, getting started working with campaigns and political groups is as easy as sending an email.

“It’s a lot easier than what you might think, just reach out to the campaign, ask about volunteer opportunities or internship opportunities, with the large campaigns would have interns like the state and national campaigns, like the Connolly and Lopez campaigns,” said Bates. “I’d say, reaching out to people and talking to people takes a lot of practice, and definitely did not come as natural to me as it does now.”

Physics often serves as an escape from politics, and vice versa for Bates.

“I wouldn’t be as productive in either apart, as I am in each of them together. Doing campaign stuff sort of helps, sort of like a palate cleanser, a chaser,” said Bates.

Time management makes this all doable for Billy. After all, he runs the campaign nearly all by himself. He certainly is not a master yet, he would be the first to swear by that. But he is improving, thanks to his classes.

“I definitely say it just takes practice and putting in effort to try and get better and better at it,” says Billy.

Dana Moskowitz is a Mason alumn, Instrument Technician and Surgical Assistant at a local Oral Surgery Clinic and is a fitness instructor for Taekwondo, HardCore and Cycle Express got to know Billy this past year as his instructor for indoor cycling. Moskowitz noticed Bates rapid improvement in his ability, and quickly got to know him personally.

“He’s been able to try new things and pick up on them quickly,” said Moskowitz. “I look forward to seeing what he does in the future.”

Catherine Read, a longtime resident of the city, George Mason Alumni, and current candidate for the Fairfax mayoral seat got to know Billy through his active participation in the community and saw firsthand his passion for serving the city.

“He has probably knocked more doors in this city than any other candidate,” said Read. “He is committed, disciplined, he knocks on the doors, he has conversations about things he cares about.”

Read, who has funded many candidates, such as local candidates like Delegate Danica Roem (D-VA.13) and Ryan Mcelveen for Fairfax County School Board, served as Bates’ first donor. Read herself has served on the council before, so she is aware what the caliber of candidate needed for the job.

“He is wicked smart. He can tell you whatever you want to know about the city,” said Read. 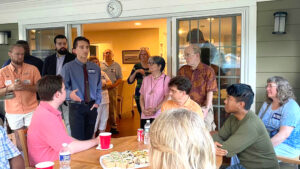 Bates explains his platform and positions to community members at a campaign kick-off event in Fairfax City. Photo courtesy of: Kathy Hackshaw

It was at Read’s house that Bates’ campaign kick-off took place. Core members of the city Democratic committee, neighbors and other community members got to get to know Bates and his platform for the first time. One of the issues that really stuck with the attendees, was Bates’ knowledge of the Fairfax City Stormwater Utility (SWU) fee.

Commercial properties, with their vast parking lots, create a vast amount of impermeable surface. This means a lot of stormwater is built up, and without the proper infrastructure, can cause serious damage to a community. Previously the cost for maintaining and repairing this infrastructure came out of property taxes, which meant homeowners disproportionally paid for something they did not contribute to. However, recently the city changed the funding so that SWU redistributes the costs back to commercial properties. The lack of messaging from the city, though, has created a game of political football. Bates, as someone involved with the environmental policies within the city, knows full well the importance of the SWU, especially with the inflammatory rhetoric surrounding the issue.

“People walked away impressed that Billy could take away a complex concept and put it into language everybody could understand,” said Read.

“The fact of the matter is the stormwater utility fee is merely a redistribution of existing means of revenue collection,” said Bates.

Billy also serves as an interesting bridge between Fairfax City and George Mason. The two communities are fairly segmented off from each other, with little crossover between each community’s events.

“You would wonder how one of the largest universities in Virginia could be at the end of university drive and yet you don’t see anybody,” said Read.

Read believes Bates can serve as an ambassador to both communities and possibly start a greater bridging of both communities. Read herself, if elected, would be the first Mason alumn to serve as Fairfax City mayor.