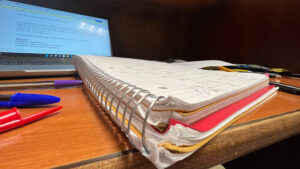 Class work can take up a lot of time, full-time student or not. With midterms going on, many Mason students are in a studying frenzy. Feelings of stress are high. Almost everyone can relate to staying up late and cramming the night before exams. That feeling has snuck up on Mason’s campus once again now that many people are shifting their focus to studying for midterms.

How do midterms affect George Mason students’ engagement with the news?

“I have had three tests this week, and I have been so stressed out trying to find space to study for all of them and get some of the concepts down,” Karla Del Cid, School of Business ‘25 said in an email regarding how she is feeling during this time in the semester.

She hasn’t been able to put much thought into the upcoming congressional elections, especially with her midterms happening soon. Even though she is stressed out daily, it’s during midterm time that she feels the most anxious.

Students can get caught up in their daily schedule and not even realize what is going on outside of their bubble.

“I didn’t even realize they were happening. I was so focused on things that were directly in front of me that I had no time to think of things happening beyond my life,” Manreet Gill, College of Humanities and Social Sciences ‘26 said in an email in regard to the upcoming midterm elections.

Gill has taken three tests in the past two weeks and has felt that she has had “no time to check the news.”

Some of the news she missed?

The US economy is currently experiencing the highest inflation since 1982. Just the 29th of September the senate approved a stopgap funding bill which would help avoid the government going into a partial shutdown.

On that same day, House republicans voted against a bill to increase mental health workers in K-12 Schools. With the Democrats currently running the House, the bill was passed.

Virginia’s congressional elections will help either make or break the democrats hold on the House. Will the Republicans take hold of the house, or will the Democrats continue their hold?

Students that want their voices to be heard will be voting during these congressional midterm elections.

In the state of Virginia, the voter registration deadline is Monday, October 17. Learn More: elections.virginia.gov/registration

To vote absentee, the deadline to request an absentee ballot by mail is Friday, October 22nd. Learn More: elections.virginia.gov/casting-a-ballot/early-absentee/