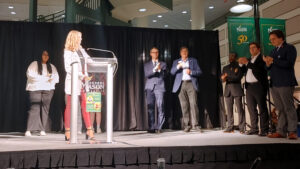 The “First of All We Vote” forum took place on October 25th in the Johnson Center Atrium on Mason’s Fairfax campus. Photo by: Meg Thornberry

Tuesday night, students and community members gathered in the Johnson Center Atrium to see candidates running to represent Virginia’s 11th District in the U.S. House of Representatives at an event entitled “First of All, We Vote.”

The event was organized by Mason Student Government and moderated by GMU Dems, College Republicans, and Alpha Phi Alpha Fraternity Incorporated, as part of their “A Voteless People is a Hopeless People,” initiative.

“The multiple moderator format was formed by really wanting bipartisanship, as well as we host this event in conjunction with Alpha Phi Alpha, so that was really important to have them on the panel,” said Nell Palumbo (Schar ’25), Student Government Government and Community Relations Committee Chair. 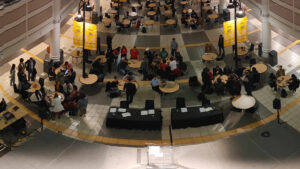 The candidate forum drew a small but passionate crowd for its entire length, and many additional students who were eating and studying nearby stopped to listen to parts.

“Hopefully some of the people that are in the crowd listen and Jim wins them over,” said Chairman of the College Republicans, Joe Szmanski. “This can be a hard place to win over voters, but I hope they see why it’s time to go Republican.”

James Walkinshaw, Fairfax County Board of Supervisors member for the Braddock District, spoke on behalf of Rep. Gerry Connolly (VA–11), who is currently in Croatia, as part of a congressional delegation meeting with European leaders to discuss Ukraine. Connolly currently serves as President of the NATO Parliamentary Assembly. 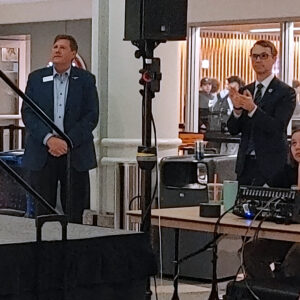 “I’m a supporter of Jim Myles, so I came to hear his points of view versus the Democrat points of view,” said Cassandra Aucoin, who came with a contingent of Myles supporters that included his wife. “It was interesting to me that Gerry Connolly has not been willing to debate at all.”

Jim Myles, the Republican candidate, told the student panel that he thought their questions were too limited in scope. After giving a brief introduction of himself and his career, he used his opening speech to discuss topics he was concerned he wouldn’t get to address.

“When I go out into the communities, with families, with friends, I think inflation really jumps out at people as one of the biggest problems,” Myles said. “It’s eight percent, and it’s effecting a lot of families, and I think it’s something worthy of discussion, but we’ll have to do that another day.”

He also said that American’s schools are failing and parents should have more control over their children’s education.

Walkinshaw thanked both the GMU Dems and the College Republicans for hosting the event, saying that they have a great history of bipartisanship and working together, as part of his opening remarks.

“I was very pleased with the organization of the event, and I really enjoy being able to hear both sides, and also having bipartisan student representation,” Evanna Kouvry (Schar ’25), a Connolly campaign intern. “I did at points feel a little uncomfortable and threatened by some of the students who were yelling violent things.”

Myles said it’s not the government’s place to forgive student loans that belong to private banks and make everyone pay for them. Instead, he wants to focus on decreasing the cost of attending school, in order to decrease the amount of debt people are taking on in the first place. Walkinshaw said he and Connolly completely support student loan forgiveness, and are also looking for ways to decrease the costs of higher education by providing more funding to public colleges and universities in the Commonwealth.

Myles and Walkinshaw differed on immigration, but had similar stances on DACA. Myles agreed that people who have lived here their whole lives and lived “the right way” should be considered American, but chided Democrats he said voted against a measure to deport gang members.

“This was the first type of event I’ve seen where they brought both sides in to fairly debate their views,” said Fourth Estate writer Erica Munisar, who was in attendance as a general audience member (CHSS ’25). “I will say from a personal standpoint, I did feel a little disappointed because I had wished to see more policy talk, more specifics than broad horizons. I did feel a little disappointed to hear climate change denied today, and this does make me feel pushed to take my friends and vote at Merten Hall to try to steer that away and vote in a politician who does believe in climate change.”

Myles said the current administration and Congress, especially Connolly, is to blame for inflation because of their actions over the last two years (Connolly has been in Congress for 14 years). Walkinshaw said that “every advanced economy” is currently experiencing inflation, and while the war in Ukraine plays a major part, the whole reason why is not clear.

Myles said that the LGBTQ+ community has no need for additional legal or political protections, but that as a judge, he thinks all Americans are afforded “equal protection under the Constitution and under the duly enacted laws.”

“I think this community has an extremely strong lobby, and I think they have an extreme amount of power in this country, in politics, in nearly every realm,” Myles said.

Walkinshaw, however, said that Virginia had a “shameful” law banning same-sex marriage that is currently invalidated by the Supreme Court’s 2015 ruling, but that this protection could be at risk. He said that protecting LGBTQ+ rights is the right thing to do, but also a smart economic decision.

“Key to that track record of attracting investment and jobs here to Fairfax County is demonstrating that we are a place that discriminates against nobody,” Walkinshaw said.

Audience members were invited to submit questions anonymously, and three of them were answered before the event, scheduled to go until 9pm, wrapped up at 8:25.

“I would have wished that they did more than three questions, because I know that my table had a lot of questions they were sending in,” Munisar said. “Sadly, we couldn’t get some of them out today, but I would love to see this again.”