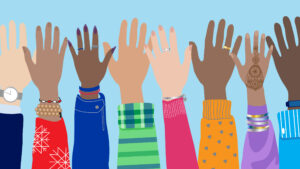 International students have a big presence on campus – they make up almost 10 percent of the Mason student body.

International students come to Mason for a higher level of intercultural exchange that they would receive at home. U.S. universities tend to hold high reputations in terms of academic excellence and the diverse programs they offer. Organizations, clubs, and campus events allow international students to feel more connected to their peers, along with helping them transition into a new culture.

“I think it’s going to be very interesting to see who wins the ground,” she said in an email, in regard to the upcoming congressional midterms.

She particularly keeps up to date with how different economies are progressing, rising politicians and any news on natural disasters. On campus, she is most interested in any new and more inclusive implementations that address women’s safety on campus.

“I feel like the most important issue that needs to be addressed in the Mason community is women’s safety,” said Javeed. “We do not realize this but there are people out there harassing people, and harassment does not have to be in a big form. It can be as little as a slight comment on someone’s appearance.”

Other students tend to keep up with news that affects their lives and studies.

“A topic that has caught my attention is the talk about a recession. I have a notification alert turned on for some financial news twitter account. They post the weekly and urgent headline. Like the federal interest rate plan and statements from business magnets on the probability of a recession,” wrote Aldur Almaknoon Salim Al Rawas (CEC ‘24).

While an impending recession is something he’s encountered recently in the news, he most consistently is interested in reading up on security breach cases and how the Federal Trade Commission (FTC) deals with them.

“During the process of being admitted to GMU and staying here for about 2.5 months, I learned a lot about U.S. politics. There are several significant differences in politics and information flow between the United States and India (my native [country]). Firstly, Discipline and communication are the first and most noticeable distinctions, even at the lowest level of the hierarchy. Second, people from all over the world, from all walks of life, professions, and beliefs, are welcome, and everyone is kept together in a healthy environment with as few conflicts as possible,” Shrushti Gupta (CEC ‘26) said in an email.

She wants to become more knowledgeable on American politics as she plans to finish her Master’s degree and then try to come back to the U.S. for work.

However, some other international students feel uninterested in upcoming elections because they’re unable to vote.

“To be honest, as an international student, I’m not interested in the elections. Sometimes, I feel like the American election has nothing much to do with me, because we don’t have any voting rights and can’t affect the result,” said Rachel Chen (Business ‘23).

“I check the news almost every day, however, most of the time, I’m more interested in news from my own country,” she said. “Apart from these, I will read the Wall Street Journal regularly, in order to update in real time, to better understand American companies.”

Ashkan Zare Hadesh (CEC ‘27) felt a similar sentiment about staying up to date on the current issues his country faces.

“Yes, unfortunately, I check the news often,” Hadesh said. “Why unfortunately? Because I am an Iranian student, and currently, there is a lot happening in Iran. I know that I cannot do anything, but the habit of checking the news is there, and I cannot help it.”

However, he is interested in legislation that impacts the environment.

“Climate change is actually what my PhD research is about right now, and I think it is a problem worth spending time on,” Hadesh said.

A particular sector in the news that almost all the mentioned students spoke of was the relationship, or lack thereof, that the U.S. has with their home country.

Most expressed the sentiment of wanting to know more about current news. Their current avenues for reaching the news include online articles and social media posts.

“If I have to make a suggestion, there could be more platforms or campaigns to attract Patriots, introducing the situation of American politics,” Chen said in an email.