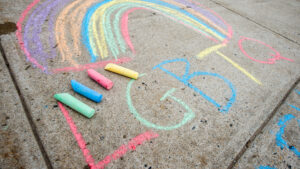 LGBTQ+ issues have arisen as a top issue in the 2022 midterm elections. By the estimate of the Trevor Project, a non-profit that focuses on improving mental health and stopping suicide among queer individuals, over 300 bills have been introduced that target queer identities across 39 states.

“As identities become more multifaceted, political responses to identities have become more multifaceted,” Josh Kinchen, Mason’s LGBTQ+ Resources Center Director, said. “Whereas policy stances focused more on transgender students in restrooms in the past, they have started to become focused more on public schools as places of fostering identity. The LGBTQ+ Resources Center has seen students reaching out with concerns regarding their siblings in K-12 schools.”

During the 2021 gubernatorial exit polling at Merten Hall, Mason’s on-campus polling place, 7.7% of students said LGBTQ+ issues were their top concern when voting.

“[Anti-LGBTQ+ policies] have been demoralizing now that there has been a push for legislation and lack of active support,” William Barker, Chair of the George Mason Queer Leadership Council, said. “There’s a lot of drive on the part of students on campus, they’re seeing what’s happening and want to help take action.”

“In the Queer Student Leadership Council this year, we have a lot of member this year who are very intent on informing other students, and raising awareness to these harmful issues, whether at the state level or the congressional level,” Barker said. “We are more intent on awareness and advocacy this year.”

Between 30-39% of Republicans feel that LGBTQ+ topics should not be covered in high school, and 84%-86% of Democrats feel that these topics should be taught, according to a poll from the University of Southern California.

“I think this community has an extremely strong lobby, and I think they have an extreme amount of power in this country, in politics, in nearly every realm,” Jim Myles, Republican candidate for Virginia’s 11th Congressional Districts’ House of Representatives seat said when asked about protecting LGBTQ+ rights at a recent candidate forum at Mason’s Fairfax campus. “I think this community can really look out for itself in that sense. It speaks volumes for their intensity and their fundraising and their dedication to their cause.”

Shiva Zarean is an undergraduate biology student (CoS ‘23).

“[Myles] saying it as if the [LGBTQ+] Community has a strong lobby is weird to me, because this isn’t a matter of influencing politics in one way or another, this is a matter of human rights.” Zarean said. “He’s saying ‘Yeah! We can look out for ourselves!’ but that’s really not the case with everything happening down in Florida. It’s terrifying.”

The Youngkin Administration recently changed schooling regulations regarding transgender students. These changes require students to use facilities that corresponding to their sex assigned birth. This includes restrooms and locker rooms. It also suggests school faculty and staff to notify a transgender students identity to their parents. Many have criticized this policy as potentially harmful to students who may not have LGBTQ+ affirmative families.

“Schools are supposed to be a safe space for students to explore their identities and grow as individuals – these initiatives would only shove them back in closets,” Molly Izer (Schar ‘24), who has experience in grassroots organizing, said in an email. “Kids should get to be kids – worrying about things like who to take to the prom and whether they should try out for the basketball team, not whether some of their most trusted confidants will be deputized to monitor not their learning, but their identities.”