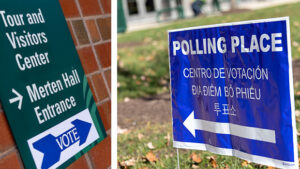 In the 2022 midterm elections, the Republican Party garnered a weak victory in the House instead of the predicted “Red Wave,” and failed to take the Senate.

Many Republicans and other conservatives at Mason have strong thoughts on the unforeseen results of the 2022 election.

“We are disappointed. We were hoping for much more of a volume in terms of a Red Wave,” Chairman of the College Republicans Joe Szymanski said. “That did not happen. We are pleased that we took the United States House of Representatives. We are not happy with the level of majority that we are going to have, and we are pretty disappointed that we did not take the United States Senate.”

This “Red Wave” was expected because of historic trends in American politics. For decades, whenever a new president was elected, his party did poorly in the next round of midterm elections. Many predicted this effect would be amplified this cycle, as Americans headed to the polls with a 40-year high economic Inflation near the top of their minds. 61% of Americans thought President Biden was directly responsible for the current inflation rate, according to Newsweek.

However, the Democratic Party retained their majority in the Senate. The Republican Party won a slim majority in the House of Representatives by gaining 9 seats, the first time in two decades that a non-incumbent party gained less than 10 seats in a midterm election.

Since the Republicans did not gain as much as they were anticipated to,  despite Biden’s supposed unpopularity on economic issues, many questions remain.

John Jennings is a Mason student who was the campaign manager for Fairfax mayoral candidate Sang Yi prior to this interview.

“There were a lot of unexpected results,” Jennings said. “Of course, no one is saying ‘Yes!’ when they lose an election. There are results that I am happy about that other conservatives I know may not be as happy about. Candidates on the extremes, on both the left and the right, lose. We need to focus on kitchen table issues.”

Conservative discussion in the weeks following the election has mostly focused on what should happen for the 2024 elections. Primary topics of discussion revolve around specific candidates to run in 2024, and different strategies to run in 2024.

“I think actually trying to make sure we have concise statements on what we want to pursue and push when we want to get into control majorities,” Szymanski said.  “If we can kind of fix that around next time for 2024, we’ll have a much better result.”