Today, March 6, is Super Tuesday. The polls are underway but, at least in the state of Virginia, voter turnout has been on the low side.

According to The Washington Post, counties like Loudoun are not even expected to reach the projected 10 percent voter turnout, noticeably down from the 2008 presidential primary, which saw numbers closer to 32 percent. In some counties, the numbers are currently as low as 1.5 percent.

One significant factor behind the lack of enthusiasm among Virginia voters for the 2012 Republican presidential primary is the absense of any apparent suspense or competitiveness. Only two candidates, Mitt Romney and Ron Paul, qualified for the Virginia ballot, and Romney is expected to win by a large margin. 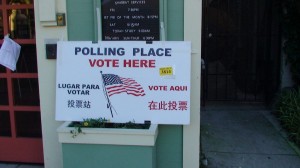 Ohio is one of the most-watched states on Super Tuesday, and The Washington Post reports that Santorum and Romney appear to be in a virtual tie there.

Newt Gingrich must win Georgia, his home state, in order to still be considered a genuine candidate. Though he had a head start and was polling with a double-digit lead over Romney and Santorum, few people believe that he has an real chance at winning the nomination, let alone beating President Obama. Polls in Tennessee and Oklahoma both showed Santorum with the lead over Romney.