“Joe and Kamala will lead with grace, intelligence, and empathy” 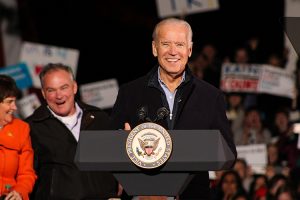 Vice President Joe Biden campaigns with Senator Tim Kaine (D-VA) at a “Stronger Together” rally at Mason’s Fairfax campus on the eve of the 2016 election. Photo by Mimi Albano

Q: Mason for Joe is an organization operating at one of the few in-person schools this semester, George Mason University. Despite COVID-19 spikes in Virginia and elsewhere, your group seems particularly active in an otherwise remote campaign. What precautions have your volunteers and leaders been taking to minimize community spread and maintain a health campaigning environment?

A: The severity and danger of COVID-19 is something that both GMU for Biden and the Biden Campaign takes very seriously. COVID-19 has made campaigning a very different experience than in elections past. Similarly to how we have all had to adapt to life among this virus, we have had to adapt and find new ways to reach students and voters in the Fairfax community. GMU for Biden has held our weekly meetings, phone and text banks, and debate watch parties over Zoom in order to prevent any unsafe, in-person contact. Any other events that we have hosted or attended, from the DC Women’s March, seeing Kamala Harris’ husband Doug Emhoff speak in Alexandria, or tabling on campus, have taken place outside while following the CDC’s social distancing guidelines. The health and safety of our members, volunteers, and the community is our first priority.

Q: Your organization is comprised primary of young voters, a bloc that clearly favors Joe Biden, but young voters have never been a consistent or reliable demographic in Presidential politics- perhaps with the exception of 2008. What makes your organization so confident that a candidate like Joe Biden can mobilize college-going and young voters?

A: Although young voters haven’t necessarily had great turnout in previous elections, GMU for Biden is confident that young voters will turnout greater this year than in any previous presidential election in recent history. Not only have we seen first-hand the amount of Mason students who have dedicated much of their free time and efforts to volunteering with us and being a part of our team, but also all of the people who have supported our organization this semester by coming to our on-campus events, showcasing their Students for Biden signs, and interacting with our social media- which gained over 600 followers in less than two months. Joe Biden is running a campaign that focuses on many issues that are very important to young voters, such as combating climate change, fighting for racial and gender equality and equality for the LGBTQ+ community, and college affordability and student loan debt forgiveness. Joe Biden and Kamala Harris will implement policy that will expand access to opportunities for all young people without the fear of crippling debt, a lack of jobs, and rising cost of living. The Biden/Harris ticket understands the challenges that America’s youth are facing and will face in the future and are focusing several integral parts of their campaign towards combatting those challenges.

Q: Racial equity and justice are certainly a topic on the ballot this election, but framed entirely differently by each of the candidates. President Trump has made a clear turn toward domestic security, lambasting rioters and looters after the wrongful death of George Floyd and shooting of Jacob Blake, to mobilize his supporters in police unions and the law enforcement community. Vice President Biden, by contrast, has made a distinction between peaceful protest and rioting, praising the majority of individuals demonstrating peacefully in the streets of cities like Portland, Kenosha, and New York. Despite these drastically different approaches to this year’s unrest, Joe Biden still has faced criticism and skepticism from young black and brown voters for past legislation and statements. What might you say to those voters who feel that Joe Biden is a relic of the institutions they distrust?

A: One of the many reasons why GMU for Biden was formed is because our members recognize that we live in a country that does not work for everyone, and this has only been exacerbated over the past four years. We see the potential in what America can be, but in order to achieve that potential we must confront the systemic issues in this country’s history and that we still struggle with today. One of the greatest problems America has had throughout its history that continues to thrive today is systemic racism. Joe Biden is running a campaign that we see is capable of addressing and taking important steps to combat racism in America. A Biden/Harris ticket will reform policing and the police system, in which racism is embedded at its foundation. Biden will also invest in black businesses and non-profits, require workplace diversity transparency, minimize racial disparities in credit scoring, and work to end predatory loans, housing disparities, and gerrymandering. These are only a few steps that the Biden Harris campaign is taking to make America a place with equal opportunities for everyone, no matter the color of their skin. Joe Biden has said that what made him decide to run for president was the tragedy in Charlottesville, where Neo-Nazi’s sparked violence during a peaceful protest, and the current president’s response to the event saying there were “fine people on both sides.” Joe Biden will be a president that will work tirelessly to ensure that racism is not tolerated in America and will set that example from the top.

Q: Joe Biden is set to win the Commonwealth of Virginia, but many states are still on the table.  What is Mason for Joe doing to ensure victory in key states like Georgia, Arizona, North Carolina, and Pennsylvania?

A: GMU for Biden has dedicated much of our volunteer time phone banking and text banking into swing states when are aren’t calling and texting into Virginia. We have participated in weekly phone banks into Pennsylvania, along with making calls into North Carolina for Pat Timmons-Goodson and Joe Biden and into Florida during our phone bank with special guest Del. Jennifer Carroll Foy. On November 2nd we will be making calls all day into several different states including: Florida, Iowa, Wisconsin, Texas, and Arizona.

Q: This past Saturday, a Biden/Harris bus was almost run off the road by a caravan of Trump supporters on a highway in Texas. This Sunday, Trump supporters around the country blocked traffic, most notably on New Jersey’s Garden State Parkway. What reassurance can you give to voters who fear intimidation, violence, or retaliation at the polls?

A: The events of this past Sunday were appalling to say the least. We understand Americans fear about not only the direction this country is headed right now, but also for their own safety and the safety of their community leading up to the results of this election. The message that we have to Americans who crave normalcy, respect, and decency in this country is to VOTE on November 3rd and bring others to vote with you! The only way we can work toward bringing back these values is to elect Joe Biden and Kamala Harris as our next President and VP. We have the utmost confidence that Joe and Kamala will lead with grace, intelligence, and empathy, things that America deserves in its highest office.

Editorial Team Note: Mason Votes is committed to providing a platform to the broad spectrum of political opinions at our University. Multiple attempts by Mason Votes to arrange virtual, telephonic, and written interviews with the GMU College Republicans were made, but went unanswered. The invitation for comment or an interview remains open.